The Most Inflated Puppy Prices

Research carried out by Benchmark Kennels has revealed the priciest puppies in the UK, finding average asking prices ranging from £1,050 to £3,700, over double the pre-lockdown 2020 value.

With puppy prices climbing since the start of last year, our team decided to investigate exactly how much more expensive it has become to welcome a new dog into your home. We analysed over 200 adverts posted on popular puppy selling sites and compared the average asking prices to pre-lockdown figures. 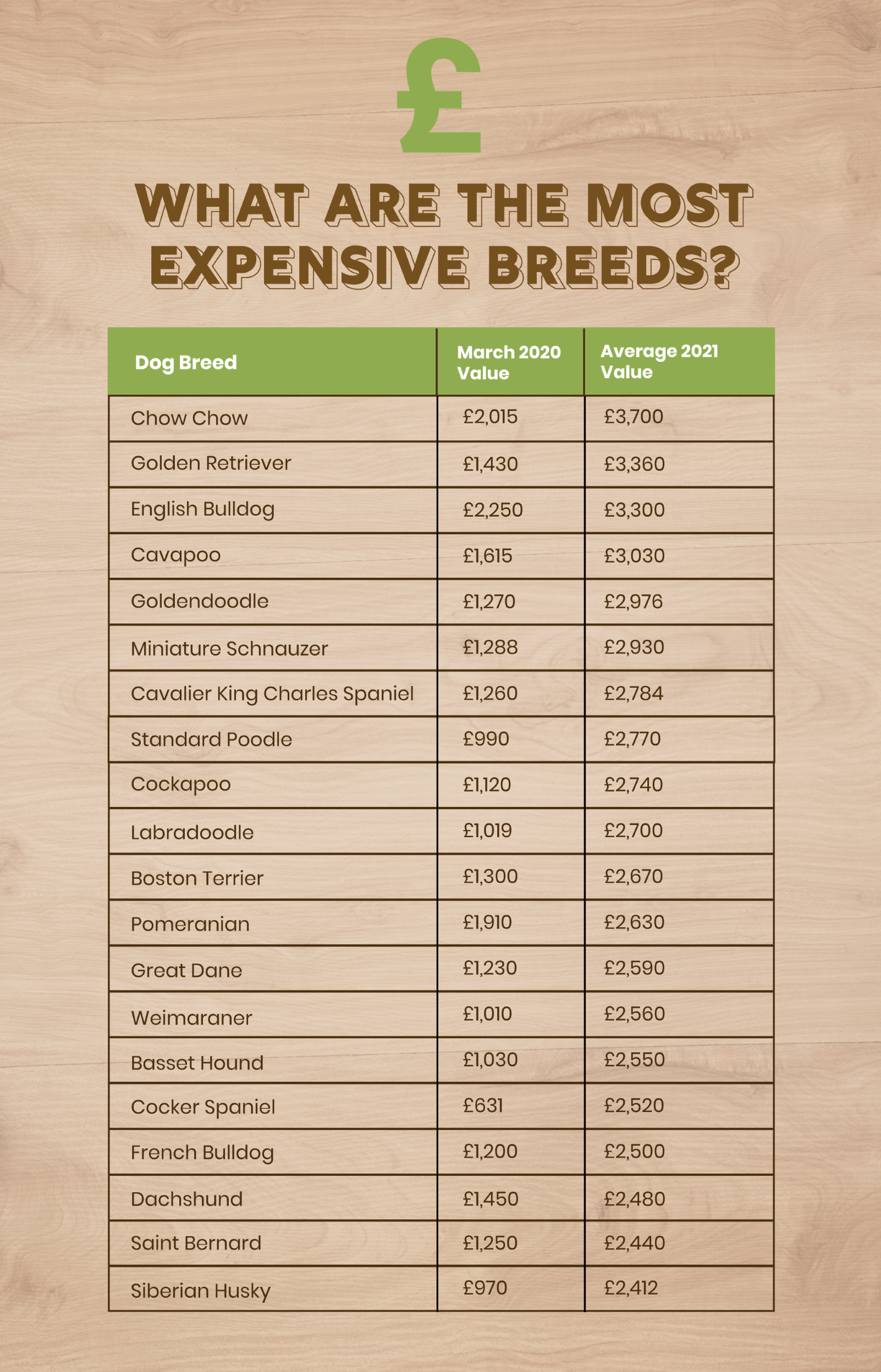 Chow Chows, Golden Retrievers, English Bulldogs and Cavapoos are now worth over £3,000

Golden Retrievers have increased in price by £1,930

Within the most expensive breeds, Golden Retrievers have seen the largest price increase, rising from just £1,430 in March 2020 to £3,360. That’s a massive increase of £1,930, with Golden Retriever puppies more than doubling in value in just a year.

The previously most expensive puppy now appears a bargain

Fashionable poodle crossbreeds have increased in value the most

The average designer crossbreed has risen in value from £1,256 in March 2020 to a current value of £2,862. Cavapoo, Goldendoodle, Cockapoo and Labradoodle crossbreeds are now some of the most expensive puppies, costing more than most purebreds. Cavapoos are the top designer dog, almost doubling in value from £1,615 to a stunning £3,030 in a year. In comparison, the average value of a purebred is currently £2,257.

What influences the price of a puppy?

Within the research, our team compared other elements of puppy price, such as gender, KC registration, and crossbreed versus purebred status, to reveal how much these factors affect the average price. 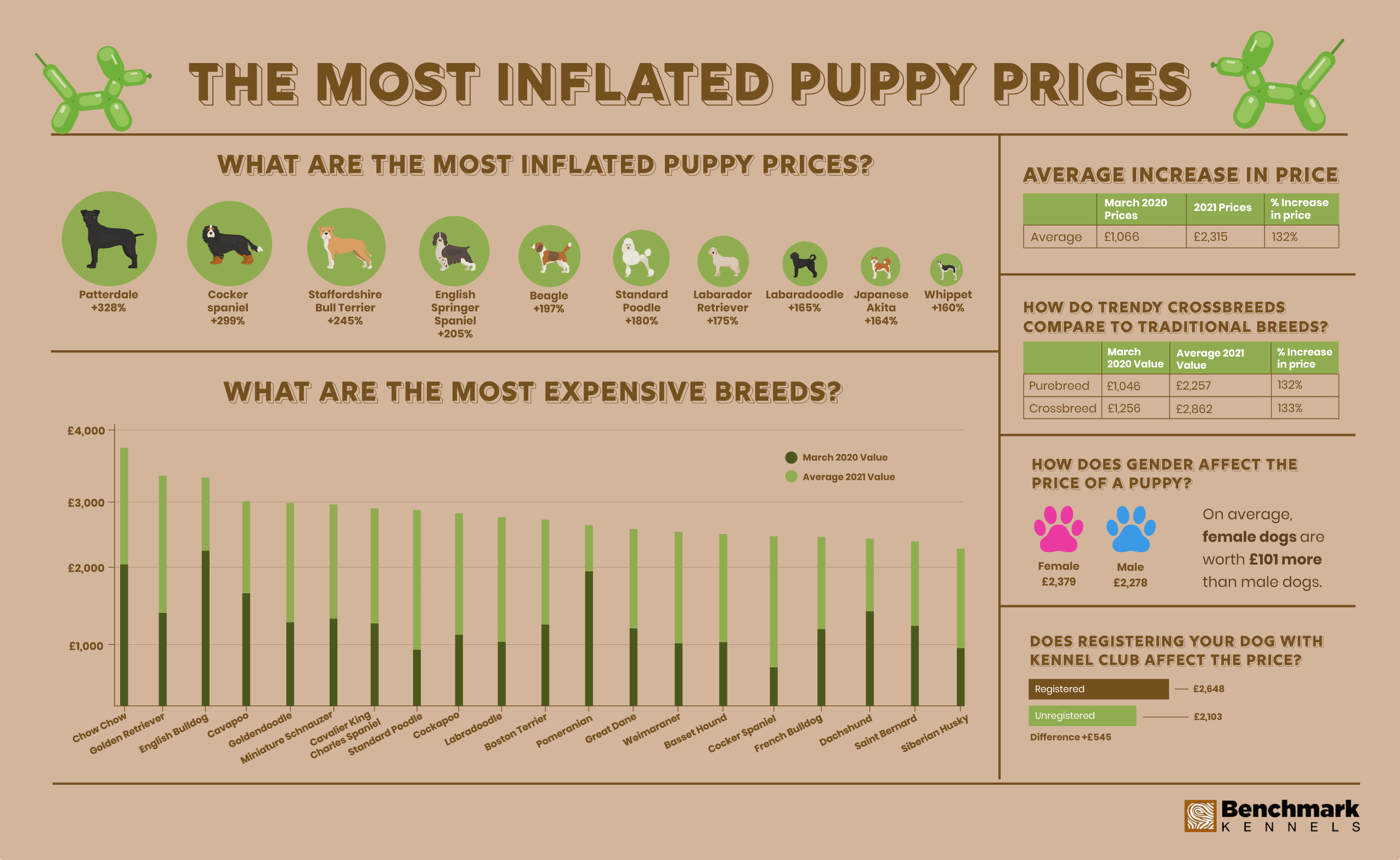 Popular crossbreeds are now worth £605 more than purebreds

However, KC registration does not guarantee that a puppy is healthy or from a responsible breeder, as the puppies registered aren’t assessed by any authority. The registration is instead based on the parent dogs – both need to be registered, not too closely related, and the mother can’t have more than four litters.

The most inflated puppy prices

The average price of a puppy hasn’t increased equally across all breeds. Some breeds have increased in price by up to 328%, while others have seen a much smaller 22% rise. 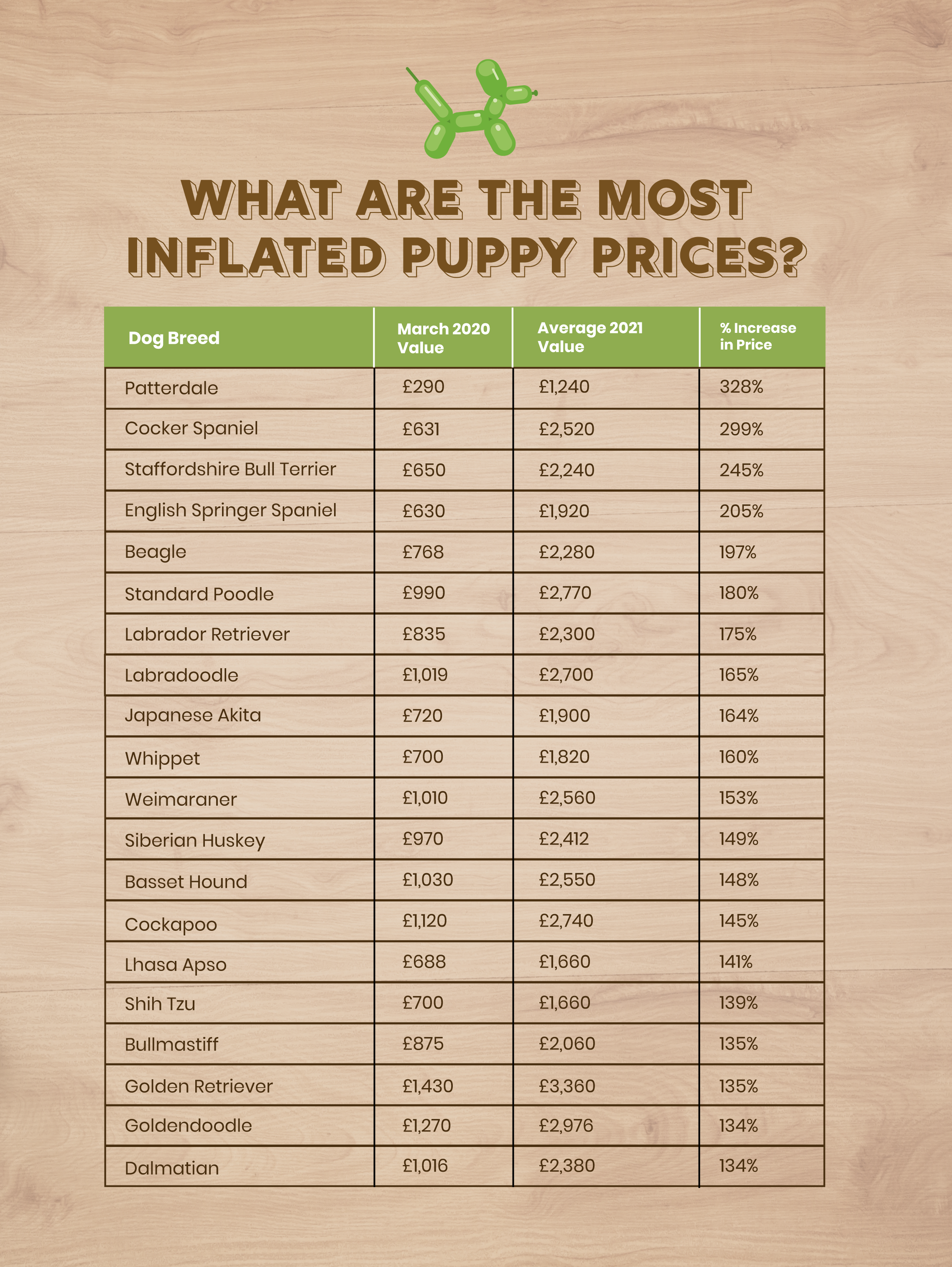 Patterdales have seen the largest increase in relative price

Over the past year, the price of the average Patterdale puppy has risen from £290 to £1,240, rising by a whopping 328%. This is the largest relative increase in value of all the breeds compared. Originating from the Lake District, these terriers were first bred for hunting. They are robust, healthy and loyal small dogs. However, they are also very active and have a high prey drive, requiring plenty of entertainment, exercise and training.

“The increase in puppy price has been driven by a huge surge in demand over the past year. Such a sudden price change is shocking, with many people likely priced out of buying a dog.

“When researching these puppy prices, we found an astounding amount of sellers advertising young dogs that they bought as a puppy but now can’t cope with. Reasons included health issues, a change in circumstances or children not getting along with the puppy. We urge people to heavily consider these factors and weigh up whether they can truly care for a dog before buying a puppy, or whether they are only able to due to their current situation – which may change in the coming months.

“Consider the home dynamic and whether you’ll always have enough time to exercise and entertain your dog. We recommend between 30 minutes to 2 hours of exercise per day, depending on the breed. Dogs can become mischievous and experience the same emotions as people when they aren’t exercised or cared for properly – they can sometimes become anxious, aggressive or destructive.

“Don’t underestimate the cost of keeping a dog after initially purchasing the puppy. Research from veterinary charity PDSA states a dog costs anywhere from £50 to £80 a month, after an initial cost of at least £370 when you first take your puppy home. On top of this, veterinary fees can become very expensive, especially with certain purebreds predisposed to many ailments.

“If you’re prepared to care for a dog, but want to avoid excessive puppy costs of up to £3,700, consider adopting from a local rescue centre. You could save thousands while giving a dog in need a forever home.”

Benchmark Kennels manufacture bespoke dog kennels to suit dogs of all breeds, shapes and sizes. You can customise your outdoor kennel to be as luxurious or minimalist as required, built using a range of materials from wooden to WPC eco-thermal kennels with extra insulation. You can order a kennel directly from our website or get in touch with us for further advice on the best kennel for your dog’s needs.

Made With By  Bigfoot Digital.

Find out more or adjust your settings.

This website uses cookies so that we can provide you with the best user experience possible. Cookie information is stored in your browser and performs functions such as recognising you when you return to our website and helping our team to understand which sections of the website you find most interesting and useful.

Strictly Necessary Cookie should be enabled at all times so that we can save your preferences for cookie settings.

If you disable this cookie, we will not be able to save your preferences. This means that every time you visit this website you will need to enable or disable cookies again.

This website uses Google Analytics to collect anonymous information such as the number of visitors to the site, and the most popular pages.

Please enable Strictly Necessary Cookies first so that we can save your preferences!